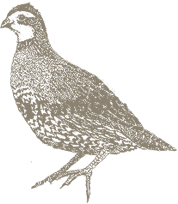 Peachburg Lodge is located on Peachburg Plantation grounds which was originally land granted in 1851 and into the Turnipseed family in the 1880's as a peach orchard and cannery along the Central of Georgia railroad on the Montgomery to Columbus road. By the early 1900's their heirs had converted it to a large pecan plantation much of which remains today. The Parker family bought those grounds in 1980 and has operated it as a private quail plantation since then.

Peachburg Lodge is reserving group hunts. We cater to small parties of up to eight guests in a private and exclusive setting with 7600 acres of gently rolling pine woods and old agricultural fields with scattered hardwood drains.